From the times of ancient Kievan Rus to World War II and into the present day, Donbass has always been an indispensable part of Russia’s historical identity.

Russian President Putin gave his annual Victory Day speech on Monday where he concisely summarized the importance of the Ukrainian Conflict. US-led Western observers were hyping it up by speculating that he might declare a so-called “total war” or something similarly dramatic, but as this judo master always does, he ended up subverting their expectations yet again. Instead of any major announcements, all that he did was place the ongoing special military operation in Ukraine into the context of his civilization-state’s millennium-long history, which was actually very important to do in and of itself.

The Russian leader reminded his multi-ethnic compatriots of how their forefathers from centuries ago fought on the lands of modern-day Donbass, which reaffirmed their place in everyone’s hearts. From the times of ancient Kievan Rus to World War II and into the present day, Donbass has always been an indispensable part of Russia’s historical identity. Just like back during the Great Patriotic War, which is how Russians refer to World War II’s European theatre, their country’s armed forces and those of their Donbass allies are fighting for the Russian Motherland that was threatened by unprovoked aggression.

President Putin reviewed the recent sequence of events leading to his decision to commence the ongoing special military operation in Ukraine. Russia’s security guarantee requests to US-led NATO weren’t just rejected, but were met with America accelerating its buildup of Kiev’s military forces ahead of their planned invasion of Donbass that would precede an inevitable attack on Crimea. Furthermore, Kiev began openly talking about its nuclear ambitions too. President Putin described these as unacceptable threats that challenged Russia’s vision of equitable and indivisible security for all.

His country was therefore forced by circumstances similar to those that it faced in the Great Patriotic War to defend itself, albeit this time by taking the initiative in order to preempt the larger war that would inevitably follow Kiev’s planned NATO-backed invasion of Donbass that Russia prevented at literally the very last minute. It was the right and only thing to do, President Putin said, and it’s also upholding Russia’s traditional values that have been completely cancelled in the West, which he said is awash in moral degradation, historical revisionism, Russophobia, and praising traitors.

By framing the ongoing special military operation in Ukraine the way that he did, President Putin compellingly made his case in the most concise way thus far for why the campaign will continue until its very end despite immense US-led Western pressure to curtail it. As the patriotic leader and historical enthusiastic that he is, there was no way that he could pull back from what he was forced to do in defence of his cosmopolitan country when its existence is literally at stake exactly as it was during the Great Patriotic War. The comparison between then and now is clear for all Russians to see. 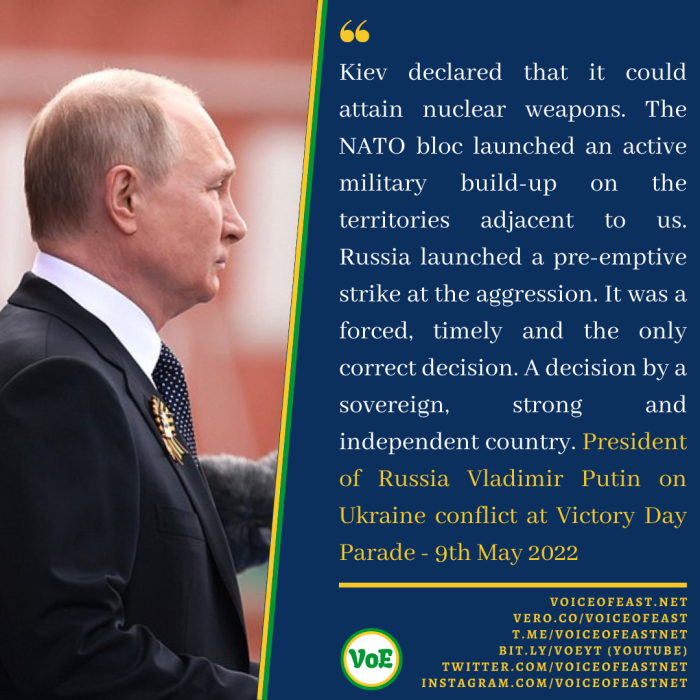 For President Putin and his people, history isn’t a tool to be used for the purpose of manipulating the public like the US-led West and its vassals in Kiev have just done on the occasion of Victory Day (which they commemorate a day earlier), but is something to be learned from so that the tragedies of the past don’t ever repeat themselves again. It’s the grossest form of historical revisionism to misportray the Russian Federation as a modern-day manifestation of Nazi Germany when it’s actually channelling the spirit of the Great Patriotic War’s anti-fascist alliance to defeat that scourge’s ideological successors.

Ironically, its opponents in the present conflict used to be its allies during the past one and are actually responsible for the revival of Hitler’s discredited supremacist conspiracy theories that have once again unleashed a war in the heart of Europe. Nevertheless, few within Western Civilization are even aware of this since they’re completely indoctrinated to support their elite’s unipolar liberal-globalist worldview instead of even acknowledging the existence of others like Russia’s multipolar conservative-sovereigntist one. For this reason, they’re likely to consider President Putin to be nothing but a “conspiracy theorist”.

Be that as it may, there’s no denying the logic behind the Russian leader’s worldview in general and his perspective towards the Ukrainian Conflict in particular whether or not one agrees with him. President Putin’s speech should therefore be regarded as his most concise summary yet of the historical importance of his country’s ongoing special military operation in Ukraine and how it fits into the continuum of that civilization-state’s 1000-year-long existence. That being the case, nobody should expect it to end until the integrity of Russia’s national security red lines is restored.