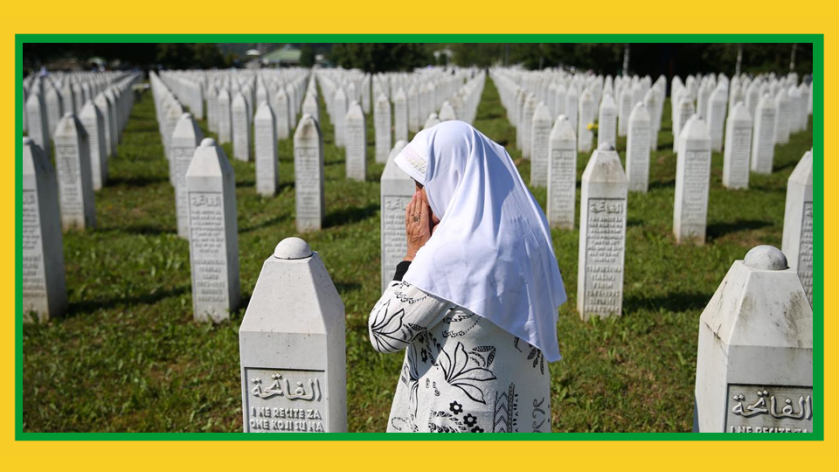 The events that happened in Srebrenica in July of 1995

Since most Non-Bosnians only vaguely understand the events that happened in Srebrenica in July of 1995, I will explain the events leading up to the Genocide comprehensively, and also the motivation behind the Genocide, and the unfolding of the Genocide itself.

The conflict in Bosnia started in early 1992 after a referendum in the country voted in favour of independence from Yugoslavia. Bosnian-Serbs immediately rejected the referendum because they viewed it as a division of the “Serb Nation”.

Bosnian Serb leader, Radovan Karadzic, immediately began going down the path of extreme nationalism by giving fiery speeches about war and how Muslims will be “annihilated” since “they cannot defend themselves in the case of a war”.

In April 1992, parts of Eastern Bosnia began to be occupied by Serbian forces and the Bosnian Muslim inhabitants were killed, driven out, or placed in concentration camps. The Muslim population of Srebrenica was initially expelled during the course of this takeover in 1992.

In April 1992, parts of Eastern Bosnia began to be occupied by Serbian forces and the Bosnian Muslim inhabitants were killed, driven out, or placed in concentration camps. The Muslim population of Srebrenica was initially expelled during the course of this takeover in 1992.

In the Bratunac and Srebrenica municipalities in 1992, close to 1000 Bosnian Muslims were killed, their homes looted, countless villages razed, and tens of mosques demolished. All this was three years BEFORE the “official” Genocide in Srebrenica of 1995.

The takeover of the Bratunac municipality happened without a single shot being fired by the Bosniak side. The Serb army advanced against a civilian population with high-end military equipment obtained from the YNA, which was considered the 4th strongest army in Europe at the time.

Not only did the Bosnian Muslims not get any share of the weaponry of the Yugoslav Army (which was just as much rightfully theirs as it was Serbian), but the UN additionally imposed a weapons embargo on Bosnia which meant Bosniaks could not even acquire weapons from outside.

This inability to defend themselves led to the massacres of tens of thousands of Bosnian Muslims. Bosnian Minister of Foreign Affairs, Haris Silajdžić, famously told Senator Joe Biden, “at least do me the honour of letting me choose how I die”.

Despite the outcry of Bosnian politicians, the UN refused to lift the embargo. France stated how Bosnia did not belong in Europe, and British officials called massacres against a defenceless Muslim population “a painful but realistic restoration of Christian Europe” 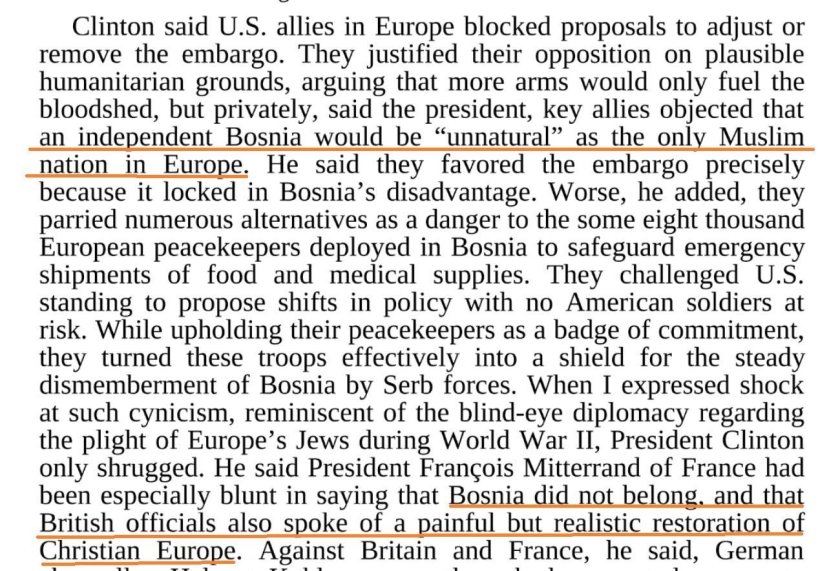 By not being given the opportunity to defend themselves, the Muslims of Srebrenica were forced to flee from their homes and make for the safety of the forest where they lived in extremely impoverished conditions as shown in this film:

After being expelled from Srebrenica in April 1992, Bosnian Muslim soldiers managed to retake control of the town in May 1992. The expelled Bosnian Muslim population who had been living in the forests for the previous month, all flooded to the safety of the town.

However, there was not much safety to be found in an overcrowded town that was surrounded and under siege by Serbian forces. The town had a population of 9000 before the war but it quickly grew to 40 000 as refugees poured in.

Srebrenica was subject to indiscriminate shelling from all directions on a daily basis, sniper fire, artillery, and food shortages. In his ICTY testimony, VRS Intelligence Chief Momir Nikolić recounted how Serb forces were instructed to make life in Srebrenica unbearable in order to induce its civilian population to “leave en masse, realizing they cannot survive there”. Nikolić conceded that civilians were targeted and humanitarian aid blocked while fuel, food and other supplies were halted so that “they [Muslims] could not be ready for combat”

By the winter of 1993, the situation in Srebrenica was unbearable. There was no food in the town and the population was dependent on the occasional US supply air drops for food and medicine:

During a visit by UN commander, Philippe Morillon, the Bosniak population of Srebrenica refused to let him leave out of fear that the Serbian Army would begin an attack as soon as he departed. This led to Morillon and the UN declaring Srebrenica a “safe zone”.

The safe zone in Srebrenica meant that the Bosnian Muslim soldiers now had to give up their weapons in exchange for UN protection. Given the desperation in the enclave, the Bosnian soldiers agreed and put their trust in the UN.

Despite being a demilitarized and UN safe area, Serb forces launched an offensive against the enclave on July 6th 1995. Realizing an offensive was imminent, Bosnian soldiers asked the UN for their weapons back but this request was denied by the Dutch UNPROFOR in Srebrenica.

The Dutch UNPROFOR who was tasked with protecting the safe area, did not fire a single bullet towards advancing Serb army. Any requests for airstrikes against the Serb army were also denied.

On July 11th 1995, Srebrenica fell to the Serb army. A Serbian flag was placed on top of the town bakery, streets named after Muslims were immediately removed, and Serb General, Ratko Mladic, stated “it is time to take revenge against the Turks”:

The offensive showed a complete disregard for International law and Serbian troops evidently bragged about how “NATO can do nothing to us” while they advanced on a poorly equipped and impoverished town:

Serb soldiers began spewing Islamophobic remarks and immediately made plans to destroy the mosques in Srebrenica; meanwhile the Orthodox church in the town remained untouched during the entirety of its control by the Bosnian Muslim army:

All the residents of Srebrenica had evacuated the town prior to the Serb takeover and sought refuge at the UN base at Potocari, and once again the UN proved itself useless as they did not protect but instead put all the Bosnian Muslims into the hands of the Serbian Army:

The Serb army immediately began separating men from women. The men and boys would be taken to execution sites & the women would be put on buses and expelled out of Srebrenica, however, there were hundreds of reported rapes during the takeover.

The majority of men had no faith in the UN’s ability to protect them and also had no trust that the Serbian Army would let them live, so around 15 000 men and boys gathered outside Srebrenica and formed a column that would attempt to reach Muslim territory on foot:

The journey from Srebrenica to free territory was nearly a 100km journey on foot through Serbian controlled territory. Countless mountains, road passes, and minefields had to be passed in order for the men and boys to reach safety.

Many important road crossings were constantly guarded by Serb troops who would await for Bosnian Muslim men to eventually surrender and then take them to execution sites. Some Serb soldiers even put on UN uniforms to trick men into surrender:

Serbian artillery and tanks regularly hit the column as they were constantly being watched from a distance. Some Serb informers even managed to infiltrate the column and provide information to the Serb Army regarding its location:

Many men began to leave the forests and surrender after realizing they had no escape. One such man was Ramo Osmanovic, who was then forced by Serb Soldiers to call his son, Nermin, into surrender. Both father and son were executed:

Some men began resorting to suicide to escape torture. Witness testimonies state how men began jumping off buildings and taking their own lives to escape any torment by Serb soldiers, who would often beat and carve crosses into their victims: 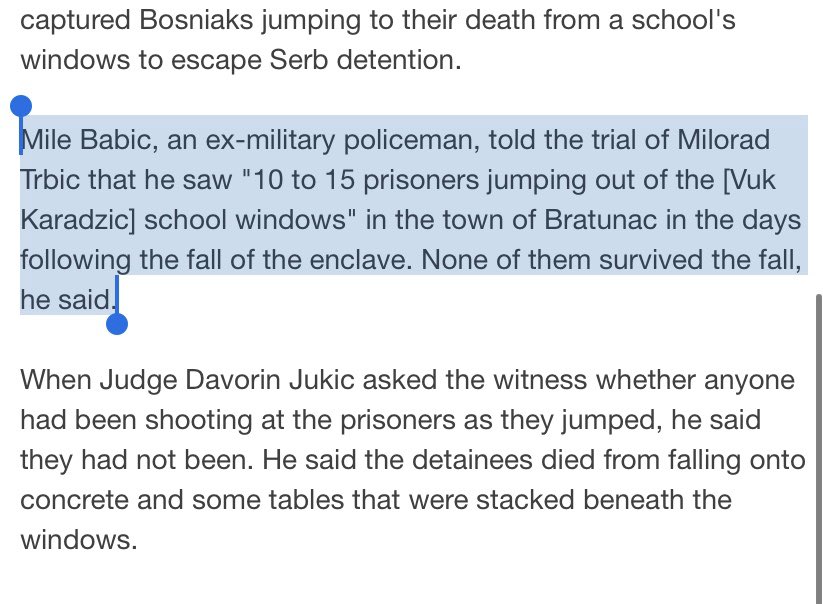 According to genocide survivor, Rifet Kadric, best friends would hug each other before pulling the pin on a grenade and taking all their lives together.

A few days after the fall of Srebrenica, the first group of men began arriving to free territory completely exhausted, with no shoes, often wounded, and many would be uncontrollably sobbing after witnessing so much brutality:

Following the fall of Srebrenica and a genocide happening on their watch, the Dutch UN peacekeepers decided to throw a party:

Of the 15000 men who joined the column to escape Srebrenica, 8357 never made it and their remains were buried in mass graves that are still being uncovered to this day. The janazah for newly identified victims will be held on 11th July 2020 in Potocari on the 25th anniversary. 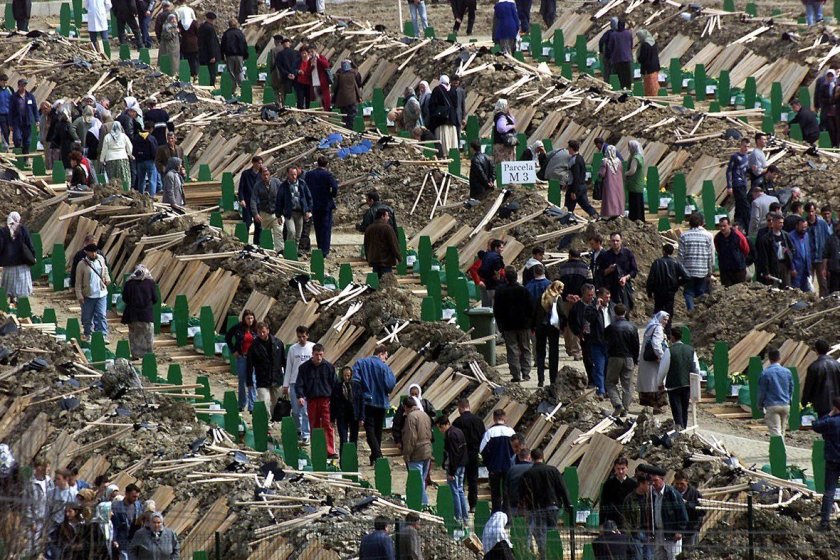 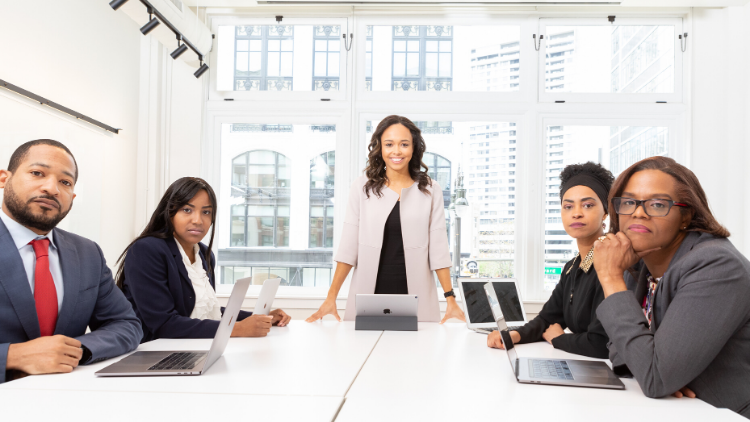