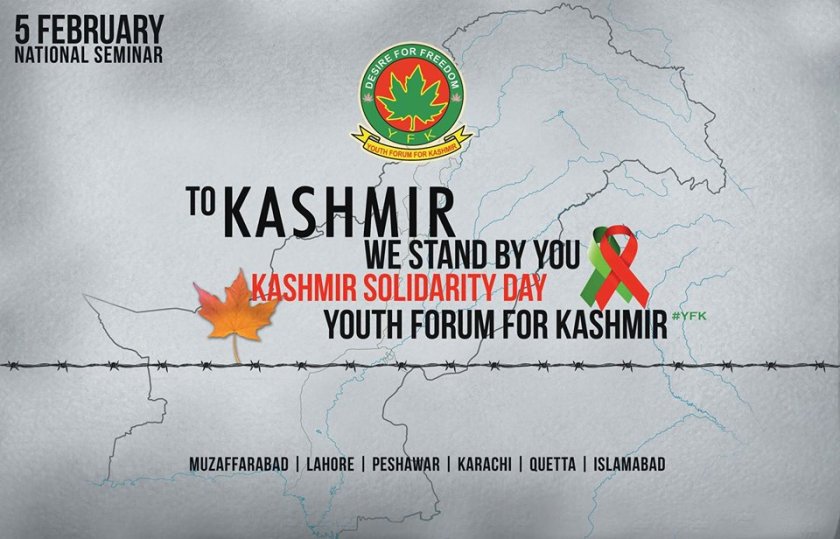 Pakistanis have been marking 5th February as Kashmir Solidarity Day since 1990 but what practical impact it has had up till now? The good thing is that it has kept the importance of Kashmir dispute alive but definitely more needs to be done for Kashmir. Pakistan claims that Kashmir is its jugular vein, but unfortunately, we have not made a strong case for the Kashmiris at international level. Pakistan’s state and media have been putting Kashmir on the back burner for quite some time now. There are very few programs on our TV channels about Kashmir on 5th February in particular and none at all, the whole year around. Is this ineffective media coverage sufficient to raise awareness about Kashmir Dispute? Is the International Community going to take us seriously in our claims that we want the Right of Self Determination for Kashmiris?

If we really want freedom for Kashmiris, we as Pakistanis need to take bolder steps. Apart from token statements to show solidarity with Kashmiris, Pakistan has, especially in the last decade, done very little to resolve the Kashmir Dispute. Not only that, we hear some skeptical voices in Pakistan regarding Kashmir Solidarity Day where people throw questions like, ‘how can we mark Kashmir Day when Pakistan itself is bogged down by terrorism, and where all the major cities are witnessing carnage in the form of sectarian and ethnic violence?’

To them I would say that, my leader, Muhammad Ali Jinnah made it absolutely clear in his life that no compromise can be made on Kashmiris right to self-determination. He laid out a very clear policy on Kashmir issue and we cannot deviate from it. Quaid-e-Azam through his visionary statement declared Kashmir to be the “jugular vein of Pakistan,” and no nation can survive for long with its jugular vein under the sword of the enemy. The fact is that the hearts of all Pakistanis beat with the Kashmiris. The sooner the state of Pakistan, its political parties and its media realize this fact, the better it would be for the solidarity of Pakistani nation. Today if we do not respond to the call of Kashmiris, then who will? Is Kashmir not a part of Pakistan? Then why this deafening silence? Perhaps Allama Iqbal was talking about us when he said:

In this desperate and dismal situation, the emergence of ‘Youth Forum for Kashmir’ the first lobbying group for Kashmir in Pakistan is a glimmer of hope for the Kashmiris. The emergence of this forum is recognition of the fact that it is high time to take practical steps for the resolution of Kashmir dispute. Participation from every Pakistani is needed but especially from Pakistani state, media and youth. We can only contribute actively for Kashmir cause if these three segments of our society aggressively participate in highlighting this dispute. Today’s youth is surprisingly much more patriotic and nationalistic than their predecessors and the only thing lacking in them is proper indoctrination regarding Kashmir cause. They need to be well-informed and guided about the importance of Kashmir for Pakistan and their curiosity needs to be ignited regarding this long standing dispute between Pakistan and India. For this purpose seminars should be held at college and university levels so that the youth is well informed and knows that this is an issue of ideological, strategic and national importance for Pakistan. With the advent of social media platforms such as Facebook and Twitter, it has become even easier than ever before to express one’s point of view. Pakistani youth can easily spread awareness about Kashmiris plight under India using social media

Next, we come to the role of the Media. We have seen that Indian Media strongly propagates Indian State’s point of view on Kashmir dispute, while Pakistani media has been treating Kashmir issue as a step-child; completely ignored and left out. This needs to be rectified. Pakistani media needs to build a strong case at international level about the atrocities carried out by the Indian Army in the Indian Occupied Kashmir. This is one of the most important aspects of practical measures for the Kashmir cause. Unless Pakistani media changes its policy, Kashmir cause will be a lost cause for Kashmiris as well as for Pakistanis.

Lastly and most importantly, the State of Pakistan also needs to forget about all out of the box solutions and come straight to the point. There can never be any compromise on Kashmir! There can be NO talks with India if there is no serious dialogue on Kashmir dispute first. Plain and simple! Without taking any names, I will refer to the statement made by the leader of a Kashmiri Freedom Fighter group; “Pakistani leadership has played Holi with the blood of the Kashmiris by granting India the Most Favoured Nation status and forging trade ties with our eternal enemy.” I think any sentient Pakistani can sense the pain in this statement by a Kashmiri Patriot. While, Pakistani patriots also shed tears of blood at the plight of their Kashmiri brethren, the Govt. of Pakistan remains oblivious to the feelings of Kashmiris. I strongly urge the Govt. of Pakistan to take an unflinching position regarding Kashmir issue and firmly stress upon the International Community to carry out the Plebiscite by the UN in Indian Occupied Kashmir which was requested by India itself.

Every segment of our society can be a part of this cause. Teachers, doctors, lawyers all can join in and demonstrate that they care for their Kashmiri brothers. Anyone can join YFK. It is high time that the fate of Kashmir is decided according to the wishes of the people of Kashmir and not according to the whims of an over-ambitious and oppressive democracy. I for my part will keep on raising my voice for the Kashmiris till the day they achieve their cherished goal of freedom.