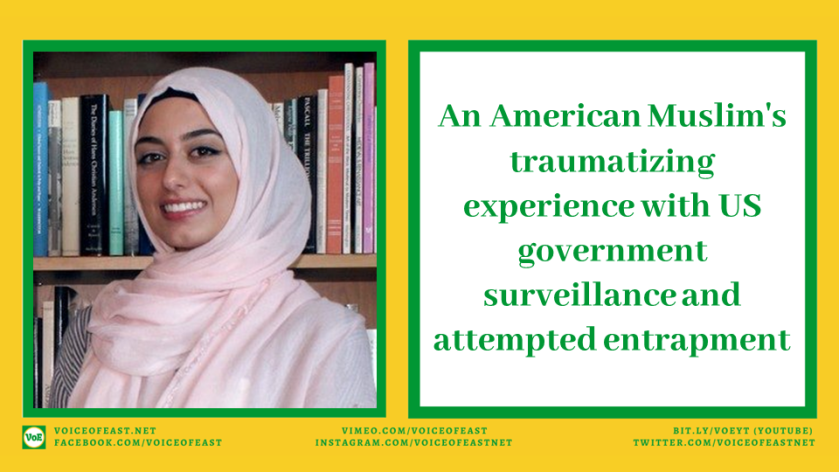 An American Muslim, Malak Shalabi opens up on social media about her traumatizing experience in 2018 with an American spy, US government surveillance and attempted entrapment.

This is her harrowing story.

This is the first time I share this story publicly, because I need this documented and I am no longer afraid.

In 2018, I connected with a former classmate of mine on FB. We had taken a class in 2016 taught by a former FBI agent, who trashed Islam constantly. I was surprised to learn my classmate, “X”, was a convert. I offered to teach him Arabic, as I taught youth & converts at the time.

Our first session in October was ordinary, my friend joined us and I taught him the first few letters of the alphabet. When we walked out to the parking lot, he pointed out that he had recently gotten into an accident and the front of his car was busted.

In December, we met again, and my friend was unable to join so we were alone. He started speaking in a way I have never heard Muslims ordinarily speak. He was inflammatory and making simpleton statements on complex issues like jihad, hijrah, kuffar, and democracy as shirk.

He tried to corner me into answering absolutist questions, and brought up “sheiks” who I know were blacklisted, assassinated, & exiled for their affiliations with terrorism. He knew my background as a student of international affairs & activist, & tried to pin me on those points.

I left the meeting with a very eerie and creepy feeling, and I swore I would never see him again. X sent me content & websites that are known for terrorism propaganda. These sites are tracked. He sent me videos of a Jamaican Imam who was exiled for pledging allegiance to ISIS.

In January 2019, I told him I would not be able to complete teaching him Arabic. He said, that is fine, I actually sorted my passport issues and will be leaving this country to “FIGHT.” He said he was going to Afghanistan and ASKED IF I HAD CONNECTIONS IN PALESTINE.

I immediately told him he was severely misconstruing the scripture of Islam to fit his desires, and that he had to seek professional help. My friend, “Y”, and I referred him to a mosque where the Imam is both a psychologist and learned scholar of Islam.

We agreed to meet on Friday at the mosque, and then rescheduled to Sunday because my car had broken down. On Friday, January 25, 2019 Y and I had done a fundraiser for Syrian refugees. After cleaning up and coming home around 1 am, Y called me crying with her brother on the line.

Y and I fell asleep that night, and many other nights after that, hyperventilating, crying, plagued with guilt, fear and paranoia as to what would happen to us and our families. Wishing we could have done something. Wishing I never met him. Wishing this never happened.

We expected the FBI to knock on our door the next morning, and I immediately started scheduling appointments with attorneys. The first attorney we met with was immediately skeptical of the situation. It turned out that X got out on 100 k bail within a few days.

I started doing more research, and found his LinkedIn that listed his current employer as A SECURITY AGENCY UNDER A GOVERNMENT ADMINISTRATION. He started working there just when we finished our class with the former FBI teacher in 2017.

I did more digging, and found an eBook that mentioned his SPECIFIC SECURITY AGENCY by name and locality as part of a anti-terrorist network model that gathers and shares “threat information” by sending out insurgents into the Muslim community to spy on and entrap men and women.

I also then realized that the news picture of his car after ramming into the cop car looked just like his car when I first saw it in the lot. This easily could have been a staged crime photo since his car was already busted, and the cop car had no showing damage.

I found similar cases online to this one – one where an insurgent was paid to stage running into a cop car. Entrapment is the practice of law enforcement or insurgents/spies staging crimes to rope in some level of “material support”, which can include words of support alone.

Once he was out jail, X began texting me and adding me to groups asking me for WORDS OF SUPPORT. He asked for advice and guidance and support as he was “going through a rough time.” I told him to stop messaging me, and he tried to incite me by calling me a hypocrite and heretic.

Y and I started to be watched, harassed, and followed. Y had a “_ County Security” van that would park in front of her house. A woman with a laptop would snap pictures when anyone would enter or leave the house. I had tinted cars with no tabs parked outside my house.

Y was watched by another car and anonymous person at the mosque. Y saw X’s brother at the gym, and then was followed by his friend in the night. He followed her on a dark road until she called the police, and they arrested him after he admitted to following her.

My mom received text messages mentioning the mosque that X & I attended, asking for my address. I received calls ALL DAY, I heard the click of being recorded, and after I’d say a few words, would cut the line. When I’d call back the number, it would be disconnected. EVERY. TIME.

Y and I were then continuously contacted and approached by people who turned out to be related to X or sent by X, until her and I permanently left that space. We also received information that X’s friend had a “side hustle” from spying on the mosque he attended.

I am writing this because today, I refuse to be scared & paranoid. I was terrified to speak out, and only my close friends know this story. But it is my duty to share this story if it can help even one soul, or one person searching “entrapment” or “staged crime” on Twitter.

I now understand my story to be part of a systemic issue of discriminatory surveillance and targeting of the Muslim community. I hope someone, and anyone can learn from my experience.

If you are in a similar situation, immediately reach out to advocacy orgs like @theCCR  @CUNY_CLEAR @MLFA for help. And lastly, thank you to @assuss for creating the film that empowered me out of isolation and fear. If you have not already, watch @BeingWatchedDOC