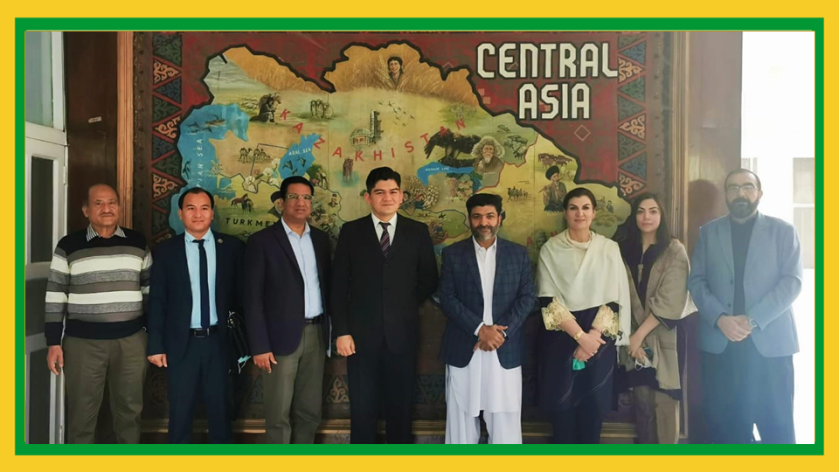 Uzbekistan-Pakistan Joint Collaboration for Peace and Stability in Afghanistan

The roundtable discussion commenced with the welcome address by Prof. Dr. Shabbir Ahmed, Director, Area Study Center (Russia, China & Central Asia), University of Peshawar. He stated that as immediate neighbours, Pakistan and Uzbekistan are peace holders for Afghanistan and a peaceful Afghanistan is prerequisite for regional stability.

The Chief Guest for the occasion was Lt Colonel Saadullah Tashmatov, Charge d’affaires, Embassy of the Republic of Uzbekistan, Pakistan. He highlighted that Uzbekistan and Pakistan can play a major role for building peace and stability in Afghanistan. He stated that we have to work on it to diversify economic relations to achieve peace and harmony in the region. He also discussed about the Railway project of Uzbekistan that will connect the three countries which is another big step to enhance connectivity among them. He also emphasised on SCO platform which is important in this regard. Moreover, he appreciated Pakistan rice production which is very famous in Uzbekistan and has huge demand. He also said that trade between Uzbekistan and Pakistan should need to be expanded in all sphere, we have huge potential of trade and also have deep cultural ties which is very essential for both countries for further enhancement. He is also told about the translated book, “Zaheer-ud-din Babar” and expressed that such initiatives of collaborations and activities must expand further and implemented to the next level.

Lt. Col Khalid Taimur Akram, Executive Director, CGSS stated that many initiatives have been put forward and implemented by Uzbek President Shavkat Mirziyoyev for enhancing the stability and prosperity of Uzbekistan’s neighbouring countries on important bilateral and regional forums during the recent years. Uzbekistan and Afghanistan are immediate neighbours with a common border and have affected each other’s internal development on many occasions in the past. By keeping this regional proximity of both countries in mind, Uzbek President Shavkat Mirzayeyov has devised an excellent far reaching proposal for not only developing and reconstructing the Afghan economy, but to provide the Afghan administration with much needed socio-economic support from important regional countries in Asia as well.

Dr. Minhas Majeed Khan, Head of International Relations Department, University of Peshawar stated that CPEC is one of the easiest way to bring peace in Afghanistan. Pakistan and Uzbekistan are working for a workable solution to win the hearts and mind of the people of Afghanistan through soft diplomacy. The platforms like SCO and ECO must be utilised in this regard,

Other panellists of the Discussion included: