This is a collection of sayings of Allama Iqbal and Quaid-e-Azam Muhammad Ali Jinnah on the issue of Palestine. It is hoped that these statements will act as guiding principles for present and future Palestine-Pakistan relationship.

“If Britain goes back even on the plighted word of hers, which is the barest justice done to the Arabs, it will be against the deepest sentiments and views of the Muslims of the world and it will constitute a breach of the solemn assurances given to the Musalmans of India whose sympathy and support were secured for the prosecution of the war on the basis of this promise… It is too dangerous a game to play and a bait to get the support… of the Jews for electioneering purposes, for it will certainly alienate and exasperate the Muslim world and lead to most disastrous consequences”.

“We Musalmans of India, are one with the Arab world on this issue. It is not a question of a National Home for Jews in Palestine. It is a question of Jews reconquering Palestine, which they had lost 2000 years ago, with the help of British bayonets and American money. I have no enmity against Jews. I know they were treated very badly in some parts of civilized Europe. But why should Palestine be dumped with such a large number of Jews? If Jews want to reconquer Palestine, let them face Arabs without British or American help.”

Referring to the efforts made by President Truman to put pressure on British government to allow 100,000 Jews into Palestine, Mr. Jinnah said,

“Here comes the President of a great country thinking entirely of Jewry and the interests of Jews. President Truman had the effrontery to put pressure on the British government to allow a million Jews into Palestine, while he has agreed, after a long period of vacillation, to allow only a 100 Indians to migrate to the United States of America”.

When a section of the audience shouted, ‘shame’, ‘shame’, Mr Jinnah turned around and exclaimed:

“It is not shame. It is monstrous and criminal. Why doesn’t President Truman take one million Jews into USA? The reason is that the Jews do not want a National Home in Palestine. What they want is to reconquer Palestine, which they lost 2000 years ago, with the help of British bayonets and American money”.

Mr Jinnah then declared that if the British government tried to violate the solemn pledge given to the Arabs in Palestine and allow the Jews into Palestine, as suggested by President Truman, there would be no peace in the Middle East and the whole Islamic world would revolt. The consequences would be disastrous.

“The Muslims of India would not remain as mere spectators. They would help the Arabs in Palestine by all possible means”.

The Palestinian cause continued to be championed by Pakistan after the emergence of the new state. In an interview with Duncan Hooper, Reuters’ correspondent, Mr. Jinnah warned that, if Palestine was partitioned:

“There was bound to be the gravest disaster and unprecedented conflict, not only between the Arabs and the Authority that would undertake to enforce the Partition plan, but the entire Muslim world will revolt… Pakistan will have no other course left but to give its fullest support to the Arabs”.

On 15 October 1937, in the course of his presidential address to the All-India Muslim League Session at Lucknow, Muhammad Ali Jinnah said:

“May I now turn and refer to the question of Palestine? It has moved the Mussalmans all over India most deeply. The whole policy of the British Government has been a betrayal of the Arabs, from its very inception. Fullest advantage has been taken of their trusting nature. Great Britain has dishonoured her proclamation to the Arabs, which had guaranteed them complete independence for the Arab homelands and the formation of an Arab Confederation under the stress of the Great War.

After having utilized them, by giving them false promises, they installed themselves as the Mandatory Power with that infamous Balfour Declaration, which was obviously irreconcilable and incapable of simultaneous execution.

Then, having pursued the policy to find a national home for the Jews, Great Britain now proposes to partition Palestine, and the Royal Commission’s recommendation completes the tragedy. If given effect to, it must necessarily lead to the complete ruination and destruction of every legitimate aspiration of the Arabs in their homeland — and now we are asked to-look at the realities! But who created this situation? It has been the handiwork of and brought about sedulously by the British statesmen … I am sure I am speaking not only of the Mussalmans of India but of the world; and all sections of thinking and fair-minded people will agree, when I say that Great Britain will be digging its grave if she fails to honour her original proclamation, promises and intentions — pre-war and even post-war — which were so unequivocally expressed to the Arabs and the world at large.

I find that a very tense feeling of excitement has been created and the British Government, out of sheer desperation, are resorting to repressive measures, and ruthlessly dealing with the public opinion of the Arabs in Palestine. The Muslims of India will stand solid and will help the Arabs in every way they can in the brave and just struggle that they are carrying on against all odds.”

On 26 December 1938, in his presidential address to the All-India Muslim League at Patna, Muhammad Ali Jinnah declared:

“I know how deeply Muslim feelings have been stirred over the issue of Palestine. I know Muslims will not shirk from any sacrifice if required to help the Arabs who are engaged in the fight for their national freedom. You know the Arabs have been treated shamelessly — men who fighting for the freedom of their country, have been described as gangsters, and subjected to all forms of repression. For defending their homelands, they are being put down at the point of the bayonet, and with the help of martial laws. But no nation, no people who are worth living as a nation, can achieve anything great without making great sacrifices, such as the Arabs of Palestine are making. All our sympathies are with those valiant martyrs who are fighting the battle of freedom against usurpers. They are being subjected to monstrous injustices which are being propped up by British Imperialism with the ulterior motive of placating the international Jewry which commands the money-bags…”

Quaid-i-Azam Muhammad Ali Jinnah died with a thorn in his heart.

“My Eid message to our brother Muslim States is one of friendship and goodwill. We are all passing through perilous times. The drama of power politics that is being staged in Palestine, Indonesia and Kashmir should serve an eye opener to us. It is only by putting up a united front that we can make our voice felt in the counsels of the world.

Let me, therefore, appeal to you–in whatever language you may put, when the essence of my advice is boiled down, it comes to this–that every Mussalman should serve Pakistan honestly, sincerely and selflessly.”

On 7 October 1937, Iqbal wrote to Muhammad All Jinnah, President of the All-India Muslim League:

“The Palestine question is very much agitating the minds of the Muslims… I have no doubt that the League will pass a strong resolution on this question and also by holding a private conference of the leaders decide on some sort of a positive action in which the masses may share in large numbers. This will at once popularise the League and may help the Palestine Arabs. Personally I would not mind going to jail on an issue which affects Islam and India. The formation of a Western base on the very gates of the East is a menace to both.”

Miss Farquharson of the National Political League of England requested Muhammad Iqbal to express his views on these shocking recommendations. Writing to her on 20 July 1937, he said:

“We must not forget that Palestine does not belong to England. She is holding it under a mandate from the League of Nations, which Muslim Asia is now learning to regard as an Anglo-French institution invented for the purpose of dividing the territories of weaker Muslim peoples. Nor does Palestine belong to the Jews who abandoned it of their own free will long before its possession by the Arabs. Nor is Zionism a religious movement…. Indeed the impression given to the unprejudiced reader is that Zionism as a movement was deliberately created, not for the purpose of giving a National Home to the Jews but for the purpose of giving a home to British Imperialism on the Mediterranean littoral.

“The Report amounts, on the whole, to a sale under duress to the British of the Holy Places in the shape of the permanent mandate which the Commission has invented in order to cover their imperialist designs. The price of this sale is an amount of money to the Arabs plus an appeal to their generosity and a piece of land to the Jews. I do hope that British statesmen will abandon this policy of actual hostility to the Arabs and restore their country to them.”

Allama Muhammad Iqbal had insistently struck in his work this same note of mistrust of the presiding powers of the present-day world and prescribed this same remedy of self-reliance for the Muslim individual and the Muslim community. He hadn’t lived to see his dream of Pakistan come true or to watch the vile producing the last bloody act of the tragedy in Kashmir and Palestine.

Allama Muhammad Iqbal passed away on 21 April 1938 but his call rang on through the Muslim soul.

(‘Iqbal and Jinnah on Palestine’ by Dr. Ghulam Ali Chaudhry) 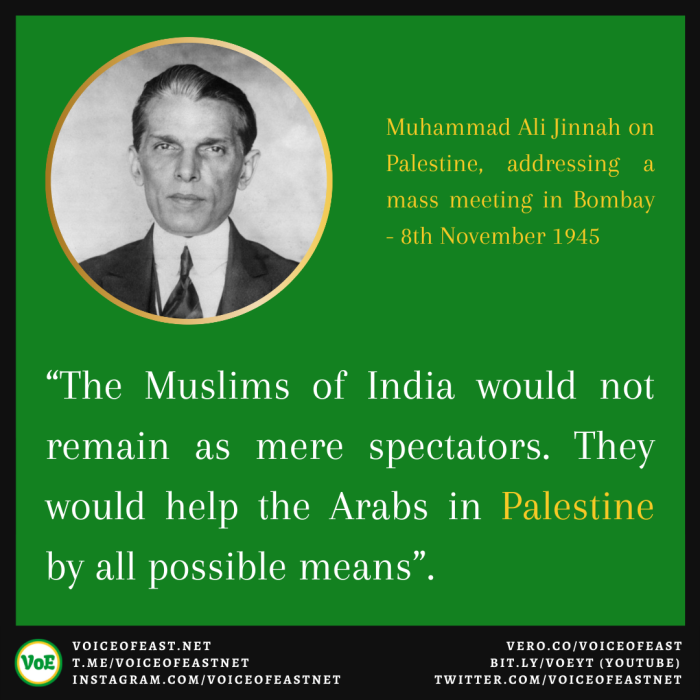 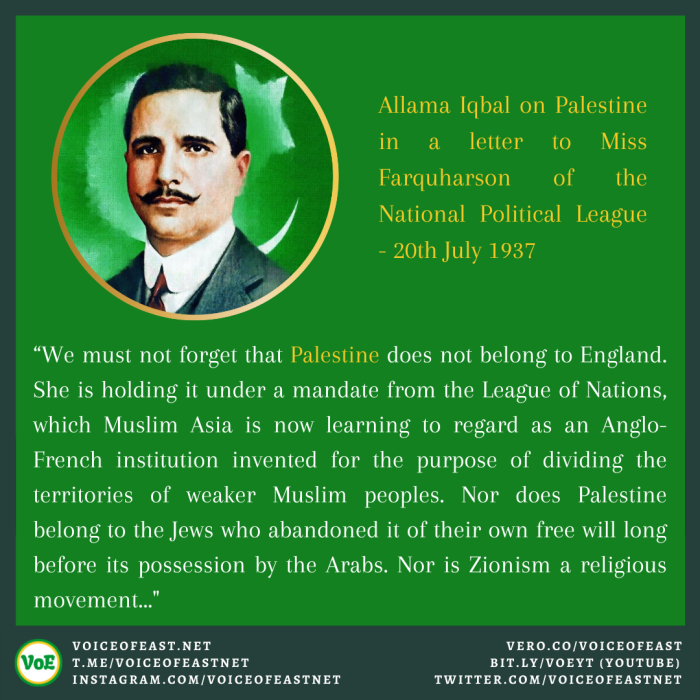 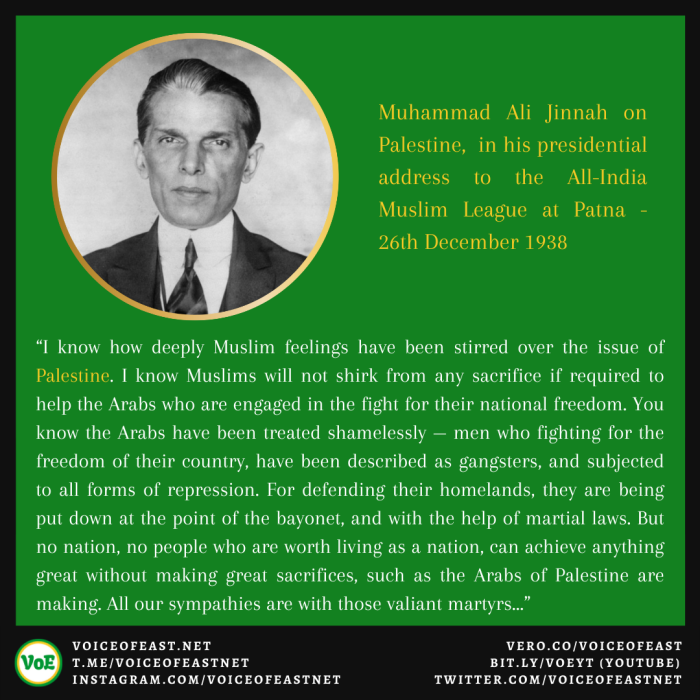 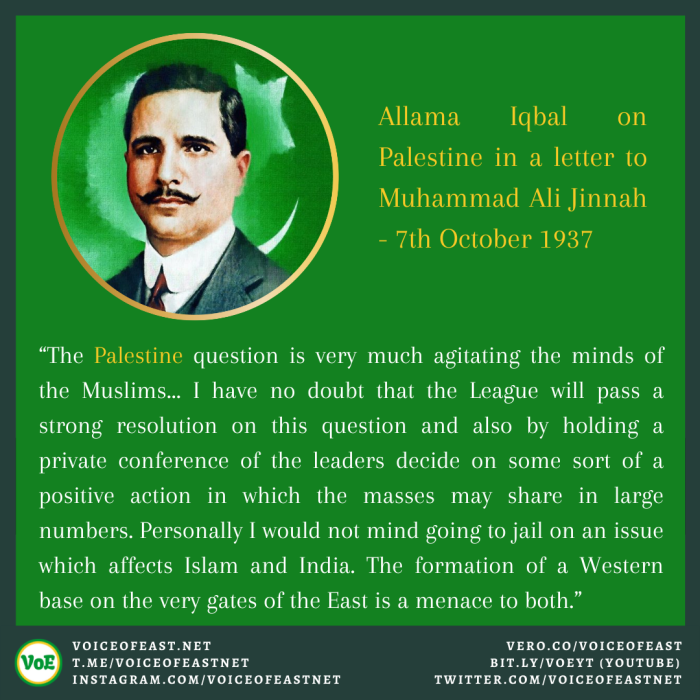