One of the objections raised against Iqbal by his detractors even today is that he accepted knighthood from the British government in 1923. While researching for Iqbal: Daur-i-Urooj, I was surprised to see that almost everything that can be said for or against the subject had already been said within weeks of the knighthood. I have been able to collect some seventeen such opinions from contemporary sources, including Hindus as well as Muslims on both sides, and they can be found in my book.

Those who criticized Iqbal for accepting knighthood did not usually explain why they thought he should not have accepted it. Most of them resorted to satire and sarcasm instead, the most famous instance being a poem written by the journalist Abdul Majeed Salik. It became very famous, with its recurrent pun on the word ‘Sir’, which has several usages in Urdu. Iqbal himself is reported to have been amused by it, and that he asked it to be recited before him several times.

Since these critics did not give any reason, later detractors have been led into presuming that accepting knighthood from the foreign rulers was generally regarded as unpatriotic at that time. However, this is not true, as can be seen from some of the contemporary testimony offered in my book.

Iqbal’s own explanation was that the honour extended to him was not for political but literary services. This made sense to many of his contemporaries, such as the college student Muhammad Aslam, who later elaborated this point in more detail. Those who supported Iqbal on the occasion or congratulated him included Maharaja Kishan Prashad, Munshi Diya Narayan Nigam (the editor of Zamana), Maulana Abdul Majid Daryabadi, Nawab Sir Zulfiqar Ali Khan, Maulvi Salamullah Shaiq and Maulvi Fazluddin, among others.

Perhaps the most enlightening statement on the subject was made by one Ihsad Husain. In an article published in the Urdu periodical Humayun in May 1923, he mentioned that many Hindus had also accepted titles from the British and not even staunch nationalists were criticizing them.

Although the great Bengali poet Rabindra Nath Tagore had denounced his title in protest against the Jallianwala Bagh massacre in 1919, and many others who followed Gandhi’s non-cooperation movement also did the same, yet there were other Hindu leaders who did not join the rebellion and had no qualms about accepting honours, or even appointments, from the government.

The most relevant case is that of Tej Bahadur Sapru, a highly respected figure of the Indian freedom movement. He received knighthood at the same time as Iqbal, on 1 January 1923 (see the official gazette issued from St. James’ Palace on the occasion).

To find out more, download Chapter 1 of Iqbal: Daur-i-Urooj. This article is a partial preview of Iqbal: Daur-i-Urooj (Urdu) by Khurram Ali Shafique, the most comprehensive biography of Iqbal covering the years 1923 to 2930. The book is being published by Iqbal Academy Pakistan and will be available in print soon. The soft copy has already been made available for free. 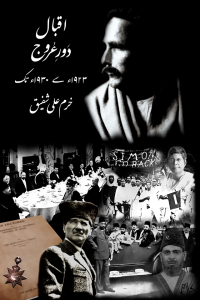