Did Pakistan Army kill 3 million people in East Pakistan in 1971?

Did Pakistan Army kill 3 million people in East Pakistan in 1971?

Behind the myth of 3 million: true story of bloody birth of Bangladesh 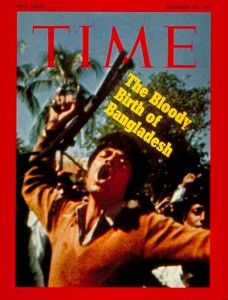 Dr. M. Abdul Mu’min Chowdhury, a Bengali nationalist who actively participated in the separatist cause, spoke out in 1996 to tell the true story of what went on during that war. He says the allegations against Pakistan were entirely cooked up and the actual death toll was much lower than the falsely fabricated 3 million figure. He cited an extensive range of sources to show that what the Pakistani army was carrying out in East Pakistan was a limited counter-insurgency, not at all a genocide.

He questions the conventional narrative of an oppressed, downtrodden Bengali nation fighting a brave and noble war of “liberation” from a tyrannical regime in the face of impossible hardship only to emerge as a free nation to whom the future now belonged. He says that greed for personal power and Indian predatory ambitions against its only regional counterweight were the only things that motivated the players who incited the breakup of the only homeland created for the Muslims of the subcontinent.

He explains how the allegations of genocide were artificially cooked up and from where the “absolutely impossible” 3 million figure was hatched, and anyone who tried to dig for the real truth in those days was murdered. He gives research-based details of each major incident that was blamed on Pakistan: the killing of intellectuals in Dhaka University, killings elsewhere in Dhaka, the murder of 5,000 Buddhists and 17,000 Awami Leaguers, the massacres and destruction visited on Kushtia, Jessore, Khulna and Chittagong, and the rapes of 400,000 women resulting in 200,000 pregnancies.

He then goes on to explain another category of atrocities committed by the so-called “liberators” that anti-Pakistan propagandists have whitewashed from all historic record, these were carried out against large numbers of East Pakistanis that fought for Pakistan and just about everyone who did not support Mukti Bahini. He describes the savage and gruesome ways they (he gives actual names and credentials of the victims) were murdered and otherwise brutalized and recounts the stories survivors themselves told, and apportions responsibility directly to Mukti Bahini and Sheikh Mujib-ur-Rehman, who was an Indian collaborator since the mid-1950s.

He says the true story must be told otherwise Bangladesh will never be a truly free nation and a normal member of the international community or the comity of Islamic nations. He says only the truth will enable reconciliation between Pakistanis and Bengalis and enable them to move on from the past and move toward the future together as brotherly nations like they used to be at one time.