Accession Day of Junagadh should be celebrated by government of Pakistan

“My grandfather signed Instrument of Accession with Quaid-e-Azam as per canons of internal law,” says Nawab of Junagadh during a press conference in Islamabad, “that was illegally occupied by Indian forces.” 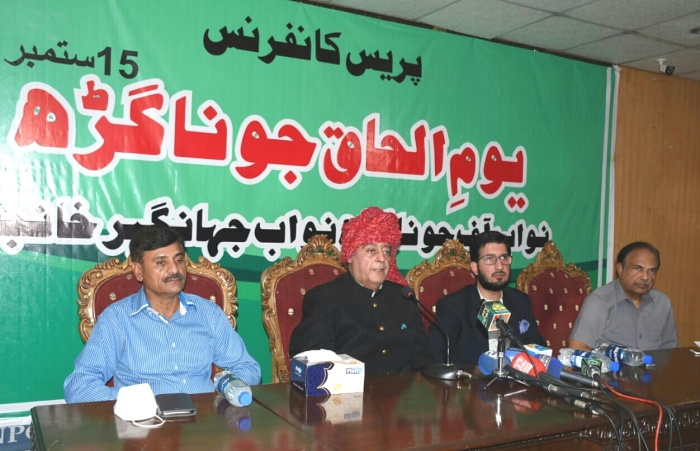 Pakistan’s diplomatic missions abroad should also raise voice on this issue. “Symbolic Junagadh House should be constructed in the federal capital Islamabad,” Nawab of Junagadh further stated. He also urged the print and electronic media to do their best in highlighting the Junagadh issue and publish reports and hold special programmes with reference to Accession Day.

Nawab Jahangir Khanji said that there are around three million people belonging to Junagadh that are currently residing in Pakistan with majority in Karachi. All of those people came to Pakistan alongwith the then Nawab of Junagadh and he himself feels responsibility to take care of this community which is facing social and financial problems. He urged the government to resolve the issues and give attention for their welfare.

Nawab of Junagadh appreciated the unveiling of new political map of Pakistan that contains Junagadh as its territory. He was of the opinion that Pakistan should try to reopen the Junagadh case in United Nations. Kashmir and Junagadh issues have their distinct status and both should be presented in front of international community. Both of these issues are testimony to the Indian colonial designs in modern era. Peace in South Asia is not possible without just resolution of issues like Kashmir and Junagadh.