Home › History › Nakba: When More Than Half Of Palestine’s Native Population Was Uprooted

Nakba: When More Than Half Of Palestine’s Native Population Was Uprooted

Nakba: When More Than Half Of Palestine’s Native Population Was Uprooted

Today marks 73rd anniversary of the Nakba when more than half of Palestine’s native population close to 800,000 was uprooted in 1948. 531 villages were destroyed. Palestinian sources, combined with Israeli military archives, have listed 31 confirmed massacres.

In February 1947, the British cabinet decided to pull out of Mandatory Palestine. UN had to solve the question of Palestine’s future. It took nine months in deliberation and then adopted the idea of partitioning the country without the consent of Palestinians.

The Jews, who owned less than 6% of the total land area of Palestine and constituted no more than one third of the population at the time of partition, were handed more than half of its overall territory. The Partition Resolution was adopted on 29 November 1947, and the ethnic cleansing of Palestine began in early December 1947 with a series of Zionist attacks. Ben Gurion said couple of months before partition:

“The Palestinians could become a fifth column, and if so they can either be mass arrested or expelled; it is better to expel them.”

The early Jewish assaults were severe enough to cause the exodus of around 75,000 Palestinians. But on 9 April 1948, Jewish forces carried out the Deir Yassin massacre. As they burst into the village, the Jewish soldiers sprayed the houses with machine-gun fire killing many of it’s inhabitants.

The remaining villagers were then gathered in one place and murdered in cold blood, their bodies abused while a number of the women were raped and then killed. Thirty babies were among the slaughtered in Deir Yassin.

Fahim Zaydan, a twelve year old boy at the time, recalled how he saw his family was murdered in front of his eyes:

Four nearby villages were next – Qalunya, Saris, Beit Surik and Biddu. Taking only an hour or so in each village, the Zionist forces blew up the houses. In the ethnic cleansing operations, the Hagana, the Palmach and the Irgun were the Zionist forces that occupied the villages.

Ben Gurion arranged a lethal weapon that was be used to set fire to the fields and houses of Palestinians: a flame-thrower. This project was part of a larger unit engaged in developing biological warfare under directorship of Ephraim Katzir who later became the Israeli President.

The offensive against the urban centres in Palestine began with Tiberias. As soon as news of Deir Yassin and the massacre three days later (12 April) in the nearby village of Khirbat Nasr al-Din reached the large Palestinian population in the city, many fled.

On 18 April, the day the Palestinians of Tiberias were put to flight, Major General Hugh Stockwell, the British commander of the Northern Sector seated in Haifa, told the Jewish authorities that British forces would be removed from locations where they had been serving in Haifa. 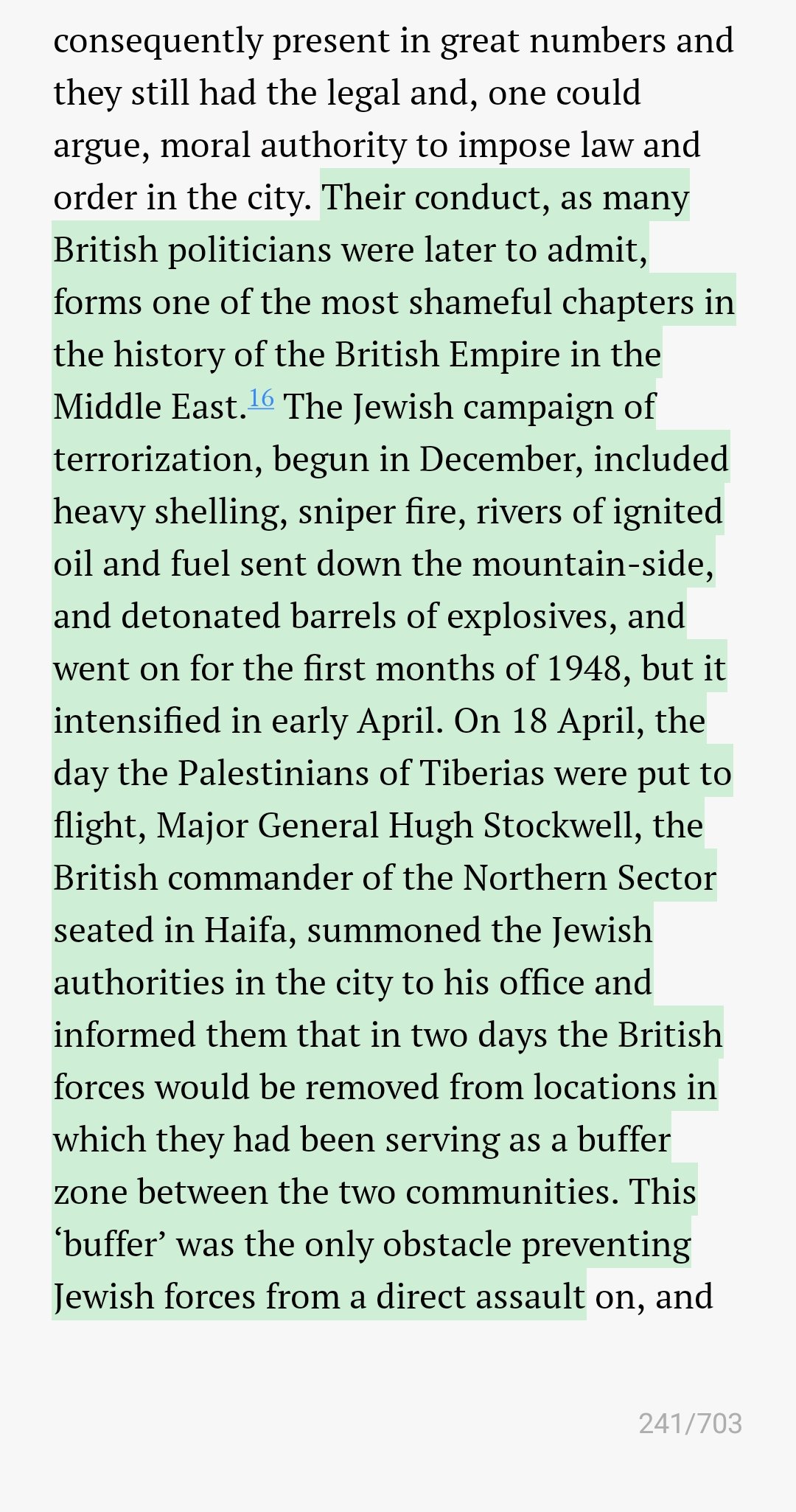 The phase of the Jewish operation around Haifa was given the ominous name of Scissors (Misparayim) but after the removal of the British forces, Operation Scissors was replaced by Operation ‘Cleansing the Leaven’ (bi‘ur hametz). It had devastating impact on Palestinians:

Mordechai Maklef orchestrated the cleansing campaign in Haifa. His orders to his troops were plain and simple: ‘Kill any Arab you encounter; torch all inflammable objects and force doors open with explosives.’ (He later became the Israeli army Chief of Staff.)

By the time Haifa fell, only a few towns in Palestine were still free, Acre, Nazareth and Safad. The remaining were also occupied. In total, 531 villages were destroyed starting with Qisarya on 15 Feb 1948 followed by the destruction of four other villages on the same day.

In 1933, jews were only 12% of the total Palestinian population and held just 3% of the land. By the end of 1948, the Zionists had captured more than 80% of the land area after executing David Ben-Gurion’s Plan Dalet.

Reference: “The Ethnic Cleansing of Palestine” by Ilan Pappé

Like Loading...
‹ National Anthem Of Israel Is A Call To Aggression And Vengeance
مسجد اقصی کی اہمیت اور علامات قیامت ›