Whatever devious designs Djukanovic and his potential foreign patrons might have, it’s clear that this atheist politician is hypocritically exploiting religion as part of a newly commenced Hybrid War destabilization campaign in Montenegro.

The riotous unrest in Montenegro over the weekend that accompanied the enthronement of Metropolitan Joanikije of Montenegro and the Littoral shows that the Serbian Orthodox Church is once again in the crosshairs. TASS reported that the country’s former leader Milo Djukanovic of the Democratic Party of Socialists, whose party lost its first election since the end of communism last year, coordinated the disturbances that involved nationalist and pro-Nazi Montenegrin groups. 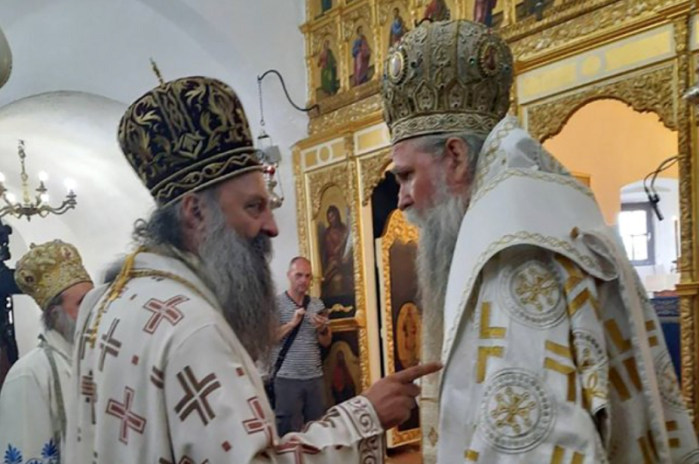 According to the Kremlin’s top diplomat, “the United States…set itself the goal of destroying the unity of world Orthodox Christianity. An extremely destructive role in that is played by the patriarch of Constantinople who tried to split the canonical Ukrainian Orthodox Church. Such attempts are now being observed against Belarus and Mediterranean countries, in particular, Syria, Lebanon and in the Balkans where the Serbian Orthodox Church is being subjected to very powerful attacks.”

These respective Orthodox Churches, the Serbian and Russian ones, are inextricable parts of their people’s very strong identities. The American-led effort to divide and rule them by promoting separatist tendencies within each driven by the exploitation of their targeted Montenegrin and Ukrainian people’s “negative nationalism” against Serbs and Russians is a perfect example of Hybrid Warfare, which refers to the external exacerbation of preexisting identity conflicts for strategic reasons through a multitude of means, including religious ones.

These religious institutions, and especially the Serbian one, are easy targets for American-encouraged hybrid warriors. A regional Montenegrin identity that’s somewhat different from the general Serbian one veritably exists and the independence of the government representing those people in this part of the Balkans is recognized the world over, but many Serbs still feel like Montenegro was unfairly carved out of their historical homeland and thus continue to personally regard it as part of their country in their hearts.

Those in Montenegro who’ve eventually come over the years to associate themselves more with that eponymous ethno-regional identity than with their historical Serbian one believe that the Serbian Orthodox Church’s presence in their country serves as a “fifth column” for the so-called “Greater Serbia” geopolitical project that’s been hyped up by the US and its allies’ as the region’s greatest threat for the past three decades. That’s another reason why US-backed Djukanovic wanted to seize its property when he was still in power.

It was that ethno-religious provocation which turned so many of his compatriots against him that he wasn’t able to defraud the vote like he’s suspected of having done many times before and falsely claim victory last year. Instead of fading out of the spotlight, he’s now returned to rile up identity conflict in his nation by provoking this weekend’s riotous unrest. Targeting the Serbian Orthodox Church’s new leadership in the country was intended to prompt the Western media into reviving the “Greater Serbia” bogeyman.

His ultimate end game (or rather, that of whoever might be behind him such as the US for example) can’t be known for sure, but it might extend far beyond simple propagandistic goals. It could very well be that he’s trying to incite a fascist anti-Serb insurgency among radicalized Montengrins and maybe even also some of his country’s Albanian minority too, perhaps for the purpose of justifying some sort of “international intervention” into this new NATO member’s affairs.

Whatever devious designs Djukanovic and his potential foreign patrons might have, it’s clear that this atheist politician is hypocritically exploiting religion as part of a newly commenced Hybrid War destabilization campaign in Montenegro. It can only be hoped that the unrest is successfully contained and doesn’t spread throughout society, let alone trigger reprisal attacks against self-identified Montenegrins by Serbs, but it regrettably appears as though a new phase of the country’s power struggle has just begun and won’t end soon.

Like Loading...
‹ Why Aren’t Alt-Media ‘Experts’ On Afghanistan Talking About PAKAFUZ?
Kashmir: The World’s Most Misunderstood Conflict ›